Marielena Montesino de Stuart
Francis, the Jesuit from "the end of the world"- one year later 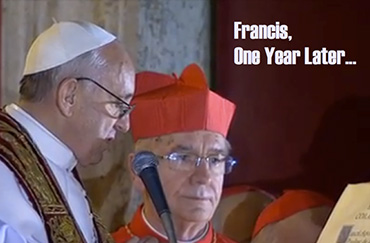 A year ago, as the crowds waited in Saint Peter's Square, I watched with sadness the election of the person who would sit on the Throne of Peter, knowing full well the consequences of a Conclave which included the likes of Cardinal Roger Mahony.

I knew that the former Cardinal Bergoglio from Argentina was one of the papabili. I had followed his track record, along with the track records of others who could be elected. As such, I was ready to go to press when Cardinal Bergoglio appeared on the Loggia of the Blessings, next to the very socialist activist Cardinal Hummes from Brazil. The title of my article that evening, exactly one year ago, was "FRANCIS: Jorge Mario Bergoglio, a Jesuit from 'the end of the world' – may end up taking you there."

After many pronouncements by the former Cardinal Bergoglio, now Francis, the Bishop of Rome, the sirens I set off to alert faithful Catholics are still being heard loud and clear across the world, one year later.

I was the first Catholic journalist, on either side of the Atlantic, to expose Bergoglio's support of homosexual civil unions in Argentina, and to announce the eyebrow-raising decisions and statements that could be expected from him – which indeed have taken place – and are causing great concern and confusion for many in the Church. Prior to his election, Bergoglio's activities as a Cardinal were mostly being discussed inside Argentina.

As I began to chronicle Francis's life and record, I received some criticism – which was quickly overshadowed by the overwhelming readership and support that I received from Catholics who are well formed in their Faith.

Those who criticized me a year ago have run out of excuses for Francis. Their criticism was mostly the result of total ignorance – or due to conflicts of interests with their opportunistic / materialistic "Catholic" activities.


And of course, there is the usual criticism from weak-kneed anonymous bloggers – who claim to be defending Holy Mother Church through their support of Vatican II.

Sadly, many of Francis's critics are also anonymous bloggers.

What are they afraid of?

These anonymous bloggers seem to forget that Christ operated in the light.

Christ did not hide when He spoke the truth about His Father.

Christ did not hide when they came to torture Him and to crucify Him on Calvary, where He gave His life for us.

At the end of the day, the only one we must fear is God.

As I have stated before, anyone who operates in the dark is not serving Christ. They are serving someone else.


I want to take this opportunity to thank the thousands of readers, in the United States and across the world, who read my commentaries about Francis, the Jesuit from "the end of the world" – and his background.

Make yourself a big pot of tea and sit back, so you may read the Francis Archives, from March 13, 2013 to the present:

Someone has to say the truth... in the light, for all to see.