January 24, 2013
One thing that I cannot abide is the use of something meant for the common good, warped into a tool of repression and ill intent. The left is hell bent on depriving Americans the wherewithal to protect themselves and they find no slander too repugnant in their pursuit. 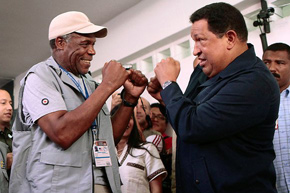 Woe unto them that call evil good, and good evil; that put darkness for light, and light for darkness; that put bitter for sweet, and sweet for bitter! Isaiah 5:20

The target of the lefts latest calumny is the Second Amendment to the Constitution. Leftist politicians and pundits repeat ad nauseam that they do not really want to infringe on our right to bear arms. Claiming to seek only practical solutions to stem the tide of gun violence.

I could write an entire article just on the inherent silliness of the left's desire to slow gun violence by going after with the most vehemence, the class of firearm least used in American crime. But I won't because semi-automatic rifles are just the tip of the spear; they want all guns out of the hands of civilians.

I was born in the middle of the last year of the Baby Boom, 1964. Growing up in Detroit in the 1970's, I didn't know a single father who did not own a gun. It would be absurd to suggest to a man back then that he shouldn't have the means to protect his family.

My father owned a .38 Special and an M1 Carbine, both of which he taught me to use, care for and fire. These weapons were no mystery to me, so I never felt the desire to touch them without my father's supervision. He didn't hide them, I knew exactly where they were. In fact he wanted to be sure that if something occurred when he was away from home, I knew what to do.

All of my friends lived in similar circumstances and the whole neighborhood shot their guns on New Years. We all brought our empty brass to school to show each other. My Uncle died last summer and we discovered, to protect my aunt, he had guns we never knew about, distributed all throughout his house.

So this latest leftist stratagem offends me to no end, namely, the inane notion that the 2nd Amendment was meant as a means to perpetuate the institution of slavery. This is nothing less than an attempt to sway Black Americans to the anti-gun side of the ledger by associating the right to bear arms with the nations greatest past evil.

This salvo began in earnest with the pig ignorant statements made by Hollywood Actor Danny Glover. A man whose greatest financial successes came in films like the guns a blazin' western Silverado and the wildly popular "Lethal Weapon" (the irony almost takes on physical form) films. Recently whilst speaking to students at Texas A&M, Mr. Glover stated:

I don't know if you know the genesis of the right to bear arms. The Second Amendment comes from the right to protect themselves from slave revolts, and from uprisings by Native Americans.

In an attempt to curb violence in Venezuela, Last June, Danny Glover's pal Hugo Chaves outlawed all private ownership and sales of firearms. Only the military, police and certain entities like security and private investigation firms can now possess guns in the Latin American nation. And then they can only purchase arms from the government.

Glover is not alone; I read an article by a Thom Hartman on a site called Truthout that attempts to make the same assertion in a more scholarly manner. To prove his point, Hartman quotes Patrick Henry (among others) who opposed the language James Madison intended to include in our Constitution with respect to civilians bearing arms:

In this state, there are two hundred and thirty-six thousand blacks, and there are many in several other states. But there are few or none in the Northern States. . . . May Congress not say, that every black man must fight? Did we not see a little of this last war? We were not so hard pushed as to make emancipation general; but acts of Assembly passed that every slave who would go to the army should be free. Hartman goes on to quote Madison who rightly expressed incredulity at Henry's fears: I was struck with surprise, when I heard him express himself alarmed with respect to the emancipation of slaves. . . . There is no power to warrant it, in that paper [the Constitution]. If there be, I know it not. Mr. Hartman's article is titled: The Second Amendment was Ratified to Preserve Slavery. The title argues intent. Another thing I cannot abide is bad scholarship, especially when it is used to advance a very dangerous idea like gun control.

James Madison wrote both the Constitution and the 2nd Amendment – it is impossible for you to say protecting slavery was the 2nd Amendments' intent when as the article points out, Madison, the author himself expressed surprise that Patrick Henry would consider it in regards to slavery and suppressing abolition.

All one needs to do is read Federalist #46, again written by Madison before the Constitution and the subsequent 2nd Amendment, to know exactly what the purpose of the Amendment is:

Let a regular army, fully equal to the resources of the country, be formed; and let it be entirely at the devotion of the federal government; still it would not be going too far to say, that the State governments, with the people on their side, would be able to repel the danger. The highest number to which, according to the best computation, a standing army can be carried in any country, does not exceed one hundredth part of the whole number of souls; or one twenty-fifth part of the number able to bear arms. This proportion would not yield, in the United States, an army of more than twenty-five or thirty thousand men. To these would be opposed a militia amounting to near half a million of citizens with arms in their hands, officered by men chosen from among themselves, fighting for their common liberties, and united and conducted by governments possessing their affections and confidence. It may well be doubted, whether a militia thus circumstanced could ever be conquered by such a proportion of regular troops.

What Madison expressed was a combined might of the whole nation to repel a potential tyrannical Federal Government. This can by no means be construed as a measure used by slave states in an attempt to halt the steadily encroaching abolitionist movement enflamed to end chattel bondage.

Madison himself knew that slavery had to end:

American citizens are instrumental in carrying on a traffic in enslaved Africans, equally in violation of the laws of humanity and in defiance of those of their own country. The same just and benevolent motives which produced interdiction in force against this criminal conduct will doubtless be felt by Congress in devising further means of suppressing the evil. – James Madison, State of the Union, 1810

You don't call something evil that you created an Amendment to preserve. But the left counts on emotion ruling the day instead of reason and truth. As was pointed out to me earlier this week by a friend, it is far easier to fool people than it is to convince them they have been fooled. The left often uses such measures because they truly believe that you can obfuscate and lie and that doing evil can and will result in good. In other words, the ends justify the means. However, tragically, all too often, the ends that the left lusts after are in and of themselves evil and therein lies the philosophy of the faithless.

My fellow American Black folks, the liberals think we are stupid and will believe anything they feed us, please don't prove them right by accepting lies! The Second Amendment to preserve slavery is just one more scheme to manipulate and control Black Americans. We don't have to stay victims.