Hassan Nurullah
We told you so!

July 20, 2011
How now progressives? What means that sickly pallor overwhelming your once hearty and vital visages? I miss that glazed over luster in your eyes! Where you once stood so resolutely confident in "Change" — you Hollywooders, you leftist tycoons, now you waiver. Do you now find your "Hope" kinked? 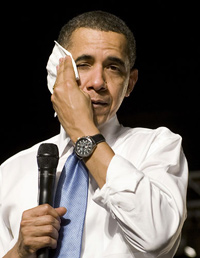 In truth, it was always so. All your "Hope and Change" hinged on flawed premises and false paradigms. What we on the right knew all along, you are just now beginning to realize, which is that ideology can oft times diverge sharply from stark reality.

President Obama is a hardcore liberal ideologue — and that's all. Ideology is the sum of his Presidential being. That too has always been so! It was so when he was a community organizer; when he was a Senator on the national and state levels and when he campaigned for the office he now inhabits.

Why liberals felt the junior Senator from Illinois would make a competent Commander-in-Chief, administrator and statesman given a far left background completely bereft of commensurate experience remains God's own mystery.

Yet, here we are! And while here we are seeing the sort of damage that can be done in a very short amount of time when competence is not considered whilst making enormous decisions like who will helm the ship of state. As a passenger on that proverbial ship, I find the naked sentimentality that led to your choice of a novice captain himself guided by foggy idealism, a poor substitute for accurate charts and a clear sky.

So, it is no small wonder that we now find ourselves dangerously off course in exceedingly dangerous waters.

Just shy of two years ago, I wrote an article wherein I expounded upon a narrative popular at the time, fueled by no less than an ex-president that anyone critical of President Obama's policies was a plain dealing bigot. In lieu of this liberal fallacy becoming a tenet amongst more rabid Obama sycophants, I coined a new eponymous law. Beside Murphy's Law, Occam's Razor and Asimov's Laws of Robotics I placed:

My eponymous law may prove to lack the staying power of its aforementioned illustrious comrades. It seems that once people actually had to live with some of the President's policies it has become okay to question the wisdom of Mr. Obama and his half-baked machinations. The actualized ones as well as the ones he proposes.

The irrational opinions the President uses to frame his political arguments have suddenly ceased to be rallying cries and have become the subject of sharp rebuke from people you would not expect, people who were, at least on the surface, supporters of Mr. Obama.

A few years ago, early Barack Obama enthusiast and supporter Warren Buffet, with blind adulation for the fresh faced candidate from Illinois, (once it was clear that Hillary was not a fait accompli) announced:"I will be very happy if he is elected president." Buffet's comment prompted Leftist bloggers to fire off postings with titles like:

By March of 2009 things had begun to appear shaky in light of the President's economic remedies' lack of...Clarity. The President granted an interview to 60 Minutes where he was asked: "Your plan really for solving the banking crisis was met with very, very, very tepid response,"

"A lot of people said they didn't understand it. A lot of people said it didn't have any, enough details to solve the problem. I know you're coming out with something next week on this. But these criticisms were coming from people like Warren Buffett, people who had supported you, and you had counted as being your..."

"And Warren still does support me," Obama interjected. "But I think that, understand, Warren's also a big player in the financial markets who's a major owner of Wells Fargo. And so he's got a perspective from the perspective of somebody who is part owner of a bank."

Quite so! A reality that Mr. Buffet himself was beginning to remember once the dew of Obama madness began to evaporate. Nevertheless Buffet continued his role as Starbuck to Obama's Ahab and toed the ideological line. Buffet stated in an interview on CNBC around the same time: "I voted for Obama and I strongly support him, and I think he's the right guy,"

This, even though the President had yet to offer any proof that would bolster such confidence and optimism.

Where once liberal Obama stooges immune to all semblance of reason held dogmatically to the unspoken creed that no one ought to find fault in Mr. Obama, it seems he has now becoming fair game.

Warren buffet offered a stern lesson in the idiocy of Mr. Obama's class warfare inducing rhetoric, when he explained the economics of corporate jets and their owners Which Obama had earlier ridiculed. He completely laid open Obama's ignorance in regards to the provisions, Mr. Obama's own stimulus plan allowed corporate assets like the much-maligned jets. This should come as no surprise to thinking people. As a hardcore liberal ideologue, who has not produced a thing himself, the President had nothing to do with the production of the stimulus plan — Other than desiring of course that it be a bill that would induce more Federal spending. Thus, he fell into his default mode and attacked the rich through his ill-informed corporate jet demagoguery. He didn't know about the Corporate asset write offs in the stimulus.

The Berkshire Hathaway head honcho is not the only Obama loyalist now at least entertaining the idea the President may be well and truly insensible to economic actualities. In light of Mr. Obama's equally careless remarks eschewing Las Vegas tourism, we find erstwhile Democrat and Obama supporter Steve Wynn, CEO of Wynn Resorts veritably frothing at the mouth as he laments this Administrations mishandling of the economy, fostering a business hostile environment, paralyzing the private sector. Wynn passionately intoned:"I believe in Las Vegas. I think its best days are ahead of it. But I'm afraid to do anything in the current political environment in the United States."

Wynn continued:"And I'm saying it bluntly, that this administration is the greatest wet blanket to business, and progress and job creation in my lifetime." Even Rap Mogul Jay Z, when asked his opinion on the criticism aimed at the President recently had to admit:"He's the president, it's fair." This is the same Jay Z, who in an interview a year and a half ago said:

"I believe the same thing about Barack that I believed at day one. What he represents is bigger than any political agenda that he can pass across the House, Senate or whatever. I think that right now he's going through a difficult period because people are putting the last eight years on his table and they're judging him by it. You can't expect a man to clean up eight years of mess in two years; it's just bad math. It's impossible."

When one considers the latest report from the Labor Department showing unemployment at 9.2%, compared to an average unemployment rate of 5.2%, during the eight years Jay Z berated, it is "fair" indeed! The unemployment rate didn't reach 6% until August of 2008 and it ended at 7.3% The unemployment rate was at 7.8% at Mr. Obama's swearing in and it has not been that low since. Unemployment peaked at 10.1% in October of 2009 and since then has only been below 9% twice. Not to wax all wonkish, because that is not my normal style, but this is interesting data when you remember that President Obama rushed through the stimulus all the while assuring us that it would keep unemployment below 8% if acted upon swiftly! And so it was.

Reactionary politics and voting emotionally as exemplified by the 2008 election is never a good idea. Especially when it culminates in the election of so pig-headed an ideologue as our current President. That is why our Founders arranged our election cycles as they did, to allow a swift correction in government if emotionalism resulted in bad choices. The Founders insured America time to come to her senses.

George W. Bush was an ideologue; Bill Clinton was an ideologue as well and born of the same species as Obama. Yet, the leftist strain infecting Clinton is not nearly as virulent as that coursing through Mr. Obama's fevered brain. Prompted by the Republican takeover of Congress, Mr. Clinton saw the writing on the wall and was wise enough to recognize the plans he put in motion were failing miserably.

President Clinton was an able enough captain to see the rocks ahead. He knew he needed to change course. Mr. Clinton cooperated with the Republicans and thanks to the leadership of Newt Gingrich and the Republican's "Contract with America," President Clinton was then able to take credit for a healthy economy and surplus. President Obama's liberal sensibilities are completely clouding what little judgment he has left. Even though John Boehner, the current House Speaker, played an instrumental role in drafting the "Contract With America," this President has his jaw set and will not be moved. To all the liberal and independent people who now bemoan their tragic trust in an unproven commodity, heavy on the show, but otherwise insubstantial-you voted with your heart and not your brain.

"The heart is deceitful above all things, and desperately wicked: who can know it?" Jeremiah 17:9

Let that be a lesson to you!