If you are at all a political creature and you have not read Jodi Kantor's New York Times article "Michelle Obama and the Evolution of a First Lady" you really ought to.

Ms. Kantor's article is easily one of the subtlest, most effective pieces of propaganda I have ever read. 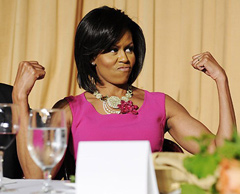 The article perfectly illustrates to the savvy, why the left controls the narrative in contemporary American politics — they are so much better at it than the right. After reading this article I was compelled to click on Ms. Kantor's highlighted by-line, as I was sure she was educated in the Ivy League and I was not wrong, Columbia quod Harvard.

Like a certain wooden horse made famous in The Aeneid, the First Lady is merely a delivery system, for the articles true intent. This was a very artfully constructed assurance to the hard left that President Obama intends to go even further to the left than his staff "allowed" in his first term. Virgil would be proud and so would the author's highbrow instructors — this is an elegant work of agitprop worthy of Pravda.

This was written specifically for the Matt Damons, Sean Penns of the world. The hardline leftists who have been critical of President Obama for not being more forcefully liberal, not doing enough to drive a hardcore pink agenda.

I am not certain whether the Obama administration's term in office should be identified as comedy or tragedy, but Ms. Kantor has deftly cast Michelle Obama as the play's heroine. She is first portrayed as a type of Antigone, defiantly standing for what is right in the face of the President's politically sensitive staff.

While the President's inner circle, Rahm Emmanuel, Robert Gibbs and the like, would have preferred the First Lady play the more biddable roll of Ismene. The staffers wanted the First Lady to aid in encouraging the President to forgo his more leftist ambitions to advance the greater Democrat Party good.

By the end of the article Mrs. Obama is more a Cassandra who knows what is best prophetically for America. But unlike the Cassandra of old, Mrs. Obama will not be silenced; her predictions will be heard and heeded after a deftly manipulated "Change" within the administration's power structure.

Ms. Kantor's article really represents the acme of the sort of work the right finds mawkish, but is so very effective when spoon-fed to the easily manipulated liberals and the fence sitting, often morally ambiguous and spongy independents. You will see no such work emanating from the pens of conservative apologists or polemicists. The right doesn't understand how really, because the right sees virtue only in success and the ideal, whereas the left can see how to spin failure into virtue.

"Woe unto them that call evil good, and good evil; that put darkness for light, and light for darkness; that put bitter for sweet, and sweet for bitter!" Isaiah 5:20

These words are utterly meaningless to liberals. What this Biblical passage warns against has become the left's specialty.

The Obama administration has been a failure no less epic than any poem by Virgil or Homer — no less tragic than any play from Thebes. Yet the left celebrates dysfunction as chronicled in Jodi Kantor's article and turns it into a thinly veiled promise that if granted another term, centrist compromise is out the window.

The First lady has not evolved, nor has her husband, but they will be set free in a second term. There will be no more subterfuge — the belly of the horse will spring open, there will be no lesser kings like Odysseus working behind the scenes to restrain King Agamemnon.

We will see a reemerging President Obama — no longer a tragic Greek emperor, now recast an American hero, an ersatz David Farragut staring down his backward right wing enemies, defiantly shouting; "Damn the torpedoes, full speed ahead." This is precisely what the hardcore leftist wants and they shall have it, if the President wins a second term in November.

The right is very good at serving up red meat to stir up it's own base. Yet the right is woefully bad at selling conservative ideas to anyone not already smart enough to know how bad the leftist agenda is for the country. And that is why the right is losing the culture war and why the country continues to decline spiritually and temporally.

If it were not so, men like Thomas Sowell or Peter Schiff would be seen and heard more. Men like Dr. Walter Williams would be a more frequent quest and we would see less of Dr. Marc Lamont Hill on Fox News.

Unfortunately the "conservatives" who have the loudest voices in America, The Bill O'Reillys, Ann Coulters, Michael Medveds... Are either more interested in advancing themselves, or too mindful of how they will be perceived, (mustn't be considered too far to the right,) to mount a true offensive against the dark forces overtaking our culture.

This is the reason the Roves and Krauthammers fight so desperately hard to ensure a safe man like Mitt Romney secures the Republican Nomination for President. Better to appear the good presidential candidate than to actually have any real ideas to substantively change the nation for the better. Real ideas are an instant disqualifier sure to get you labeled unelectable.

The right screams anyone but Obama — but that anyone has to be just conservative enough to win and not a wit more. And we are satisfied with that? We must be, because that is all I ever hear. And that is all we ever get.

Where is the right's Jodi Kantor?